Back to School: How to Write

September 11, 2017/Randall Breland/Monday is for Habits 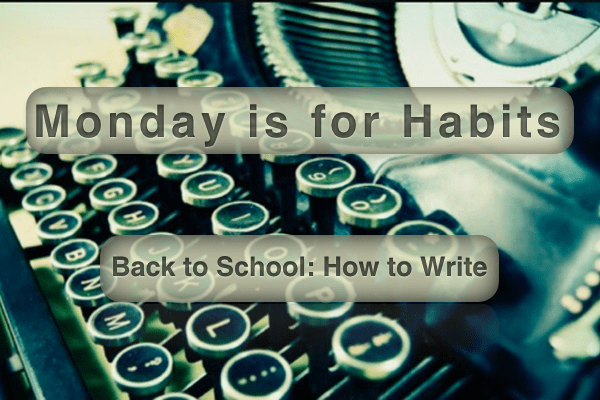 Winston Churchill won the Nobel Prize for Literature in 1953. By the end of his life, he had penned forty-three books and opined in thousands of columns. Surprisingly, many do not know that Churchill performed terribly in school, regularly neglecting mathematics, French, and Latin. He had to have tutors who force fed him formulas, declensions, and conjugations. Then later on, while he flourished in studying all matters military—mapmaking, fortification, riding, tactics—when he first applied for military school at Sandhurst, he had to take the exam three times and barely scored enough marks to make the infantry.

How did Churchill’s middling efforts in school prepare him to lead Great Britain twice as prime minister and to earn an international reputation as a master of the English language? Let me give you a few insights from Churchill’s life. If you tend to these, you too may find the joy and practicality of writing and of writing well.

Churchill performed so poorly in Latin and French that he was sent to remedial classes with the “stupidest boys” to learn to write English. In this remedial class, Churchill was taught the ins-and-outs of English. Here is his account from his memoir, My Early Years:

We were considered such dunces that we could learn only English. Mr. Somervell—a most delightful man, to whom my debt is great—was charged with the duty of teaching the stupidest boys the most disregarded thing—namely, to write mere English. He knew how to do it. He taught it as no one else has ever taught it. Not only did we learn English parsing thoroughly, but we also practised continually English analysis. Mr. Somervell had a system of his own. He took a fairly long sentence and broke it up into its components by means of black, red, blue, and green inks….It was a kind of drill. We did it almost daily. As I remained in the Third Form three times as long as anyone else, I had three times as much of it. I learned it thoroughly. Thus I got into my bones the essential structure of the ordinary British sentence—which is a noble thing.

What may strike you in the above piece is that Churchill’s paragraph is full of indefinite references, sloppy dashes, and passive verbs. In fact, Churchill is known for writing to-the-point, declarative sentences that some literary critics would say lack style. His columns were syndicated the world over, his books flew off the shelves, and his speeches drew huge crowds. Churchill knew the mechanics—and regularly ignored them. He credits learning mechanics to giving him the foundation to write and speak with such clarity and conviction. If you have not learned how to diagram or learned the fourteen rules of commas, do it today! In fact, parents, make sure your students do this and make sure they are in a school that emphasizes grammar and mechanics. We communicate more today than ever. With so much information and opinion passing through the air waves every second, the world needs believers who can write with clarity and conviction.

Every successful writer, from C.S. Lewis to J.K. Rowling to Winston Churchill, will tell you that you must read if you want to write well. Without an active reading habit, you cannot learn the rhythms and idioms and shared knowledge of Western culture. In other words, even if you are a grand writer, you will lack the ability to communicate effectively. When Churchill served in India as a soldier, he spent his afternoons reading political history. He began with Edward Gibbon’s six-volume classic, The History of the Decline and Fall of the Roman Empire. He then continued to consume Thomas Babington Macaulay’s four volume History of England from the Accession of James the Second. These two classic and lengthy works sparked in Churchill a voracious appetite for reading and knowledge. These histories, along with dozens of others, also formed the bulk of his political and military strategy later in life.

Harvard Business Review published an article in August of 2012 that was titled For Those Who Want to Lead, Read. This article noted, for the first time in U.S. History, less than half of the U.S. population is reading literature. Yet, many successful business leaders such as Steve Jobs, Phil Knight, and David Rubinstein are avid readers. Reading will make you a more effective leader by increasing your verbal intelligence and vocabulary, developing your emotional intelligence, teaching you the tactics of persuasion, reducing your stress, sparking creativity, teaching you abstract reasoning, and may even fend off Alzheimer’s (https://hbr.org/2012/08/for-those-who-want-to-lead-rea).

3. Churchill wrote on a daily basis.

Of equal importance to learning grammar and reading widely, you must write habitually. You do not need to write a lot to do this well. In fact, if you write in little bursts every day, you will likely find yourself more productive. I limit my writing time for blogs to 70 minutes. The time crunch forces me to start putting words on the screen. In fact, because I know I have the time crunch, I start taking notes in my journal or on my phone’s notepad days ahead of time. This sparks my creative thinking.

Churchill had a regular habit of writing late into the night. Early in his political life, he took a summer vacation away with his family. Every single night, he went down to his room and would write for 5-8 hours straight. Later in life, he wrote his major works after dinner, dictating to a slew of frenzied secretaries. Churchill dictated because it allowed Churchill to hear the words, not just see them. It is much more important that you hear the words—the rhythm, the images they illicit into our mind, the consonance and assonance—than that you see them. Churchill was able to write volumes upon volumes of books simply because he gave time to it every single day—even when he was Prime Minister and leading the war effort against Germany.

4. Churchill wrote what he loved.

Churchill wrote about military history, English history, and British politics. These were his lifeblood. It was easy for him to write about these things because he cared deeply about them. He is known for saying, “History will be kind to me for I intend to write it.” Some would argue he did just that! What do you love? What do you spend time doing every day? What is that thing you cannot wait for until the weekend? If you enjoy a thing or hobby or subject and talk about it easily and regularly, then write about it.

I’ll leave you with one of my favorite quotes by C.S. Lewis, who was also a voluminous writer: “You can make anything by writing.”