November 6, 2017/Guest Post/Monday is for Habits 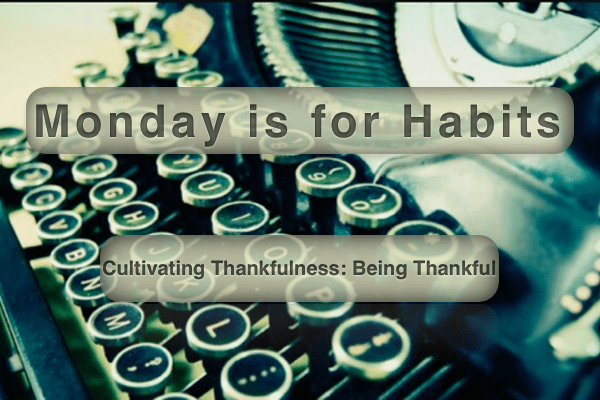 “When it comes to life the critical thing is whether you take things for granted or take them with gratitude.”

What does it mean to be thankful? As we approach Thanksgiving, let’s take some time this month to think about the discipline of being thankful and consider some ways we can grow in our thankfulness. To get things going for us, let’s look at Luke 17:11-19 and consider what it means to be thankful by looking at the tenth leper.

In Luke 17 Jesus is heading to Jerusalem and on the way, He runs into ten lepers. Leprosy was a bit of a catch-all description for a number of skin conditions, not necessarily what we think of today as Hansen’s disease. The treatment and outcome for those who had any of these conditions was the same, a label of being “unclean.” Being leprous meant that you were unclean (unable to worship), contagious (unaccepted socially), and therefore had to live outside of the city (unsecured from attacks or elements). Basically, you were resigned to die alone because since the laws regarding leprosy were written in Numbers 13-14, there had been less than a handful of people who were healed that we know of (Moses in Exodus 4:6-7, Miriam in Numbers 12:10, Naaman in 2 Kings 5, and the leper Jesus healed in Mark 1:40-45/Matthew 8:14/Luke 5:12-16). Outside of these four, if you had a skin condition that was considered leprous, you did not have hope. So, let’s just note that these men were without hope and somehow Jesus came close enough to them to hear them.

They cry out from a distance, which is due to their legal quarantine. They are not allowed to come near anyone because of the contagiousness of their disease and yet, to those who are left for dead, Jesus comes near and gives life. Leprosy, biblically, is treated as an external manifestation of sin. It’s the dead and decaying skin externally, which is meant to represent the dead and decaying soul internally. In 2014, Dr. Ligon Duncan preached at T4G on this very topic and showed how anyone else who touched a leper became unclean, but when Jesus touched a leper they became clean. Jesus didn’t even have to touch these men, he just commanded them to go and as they went they were cleansed. We need to pay close attention to verse 15 where we see only one of the lepers returns. In fact, in verse 17, Jesus asks, “Were not ten cleansed? Where are the nine?” Now, Luke’s point is to show us that nine experienced grace, but only this one experienced saving faith. While the point of the text is that only one was saved, that one being a Samaritan, I want us to consider the reality that only one leper said thank you. Let me point out three quick things from this passage that I think we need to consider about thankfulness.

First, thankfulness is a response. Jesus did something for this Samaritan man and he responded by saying thank you. Look at the text, he turned around. Instead of continuing on his way or going to celebrate, he turned and went right back to the person who had given him physical liberation. When someone does something for you, you will respond. The question is will you respond with gratitude or ingratitude? Notice that the majority in this text, and I would say that the majority of people in the world today, respond selfishly. We are naturally predisposed not to see things as gifts, but as deserved, earned, or not worth our time. Thankfulness is a conscious decision to acknowledge the gift and giver as well as fight against pride and selfishness. The next time you go to a restaurant, notice how many times anyone says thank you. It won’t be often because we now see the service industry as owing us, it’s their job to serve us well. This man responded because he realized he wasn’t owed, he didn’t deserve, and he was in need of something that could not be met apart from Christ’s intervention. How often do you respond with gratitude to those who do something for you? How often would ingratitude define your nature? Thankfulness is a conscious response acknowledging the kindness, service, and action of another on our behalf.

Notice next that the man not only turned back in response to Jesus’ grace, but he was also “praising God with a loud voice; and he fell on his face at Jesus’ feet, giving Him thanks.” Thankfulness isn’t just a thought, it isn’t just a feeling, it’s an action. This man was given new life physically and as we see at the end of the passage, he was given new life spiritually. Think about this man’s life. He had this disease, whatever the skin condition was, that was likely painful. He was separated from his family and community because of his disease. That meant he had to leave his family, whether that meant his kids or if he was the kid and it meant no comfort because there was no one to care for him other than other lepers. He was socially not just an outcast but theologically had no access to the temple to worship. Imagine how hard it would be to live like that even for a short period of time. We don’t know how long he had been in this position, but we do know that one encounter with Jesus changed everything. If Jesus could give life where there had only been death, would a feeling or thought be an appropriate response? What would you do if you had a terminal illness that isolated you from your world and someone walked into your hospital room and just handed you the cure? A high five seems a bit inappropriate. Inactivity implies that you haven’t considered what was given or done. Inactivity reveals a selfish heart. Being thankful requires action and action that is appropriate in response. This man had been given back his life so falling at Jesus’ feet and praising God makes complete sense. What can you do today to thank someone for their activity in your life?

The last thing that we see in this text is that thankfulness is a choice. Where are the nine? Who knows, right? All we know is that none of the others came back to thank Jesus. Could anyone have done what Jesus did? No one obviously had been able to heal them. Yet in that moment they all chose to do something else. I am sure some ran straight back to their families to show them what had happened. Here’s the thing though, one guy didn’t. One guy knew it was only because of Jesus that he could run back to his family or anywhere else. It’s not just one guy, it’s the Samaritan guy. There’s a lot of cultural weight in that, but the simple point is that the one non-Jewish guy came back. The guys who should have known something was up didn’t choose to come back. There was only one source of healing for leprosy in the Old Testament. Moses, Miriam, and Naaman all asked God and were healed. Jesus has just shown them clearly who He is and they still chose to keep going. Life is always going to be busy but let’s be honest, it’s never too busy to say thank you. It’s the difference between using someone and caring for them. This Samaritan man chose to say thank you and Jesus gave him more than He had ever imagined. Choosing to say thank you encourages and acknowledges the gift giver. Choosing to say thank you shows your appreciation for the gift. Choosing to say thank you grows a thankful heart in you. It’s one choice but that one choice has an effect on you, the giver, and others around you. Will you choose to say thank you today?

Thankfulness is a response. When someone does something for you either respond by thanking them or respond ungratefully by ignoring them and their gift or action. Thankfulness is an action. Too many of us stop short by feeling thankful, but expressing thankfulness requires doing something. Lastly, it’s a choice. I schedule most of the things I have to do in my reminder app on my laptop and phone. I schedule school work, work projects, personal reading, etc.… in there. When things come up as due a reminder pops up on my phone/computer and I can click one of three things, done, snooze, or ignore. Unfortunately, like the nine in Luke 17 I think when it comes to saying thank you, most of us click the ignore button. The outcome is that not only are people not thanked, but our ungrateful hearts will become more ungrateful. We need to grow in the discipline of thankfulness because every minute of our lives is a gift. As Charles Spurgeon said, all of life is grace. We say thank you because we deserve nothing, and yet the Lord is so gracious to give us everything. Every moment, every gift, every action is all from Him and an opportunity to glorify Him. So, turn around, praise God loudly, and say thank you today.