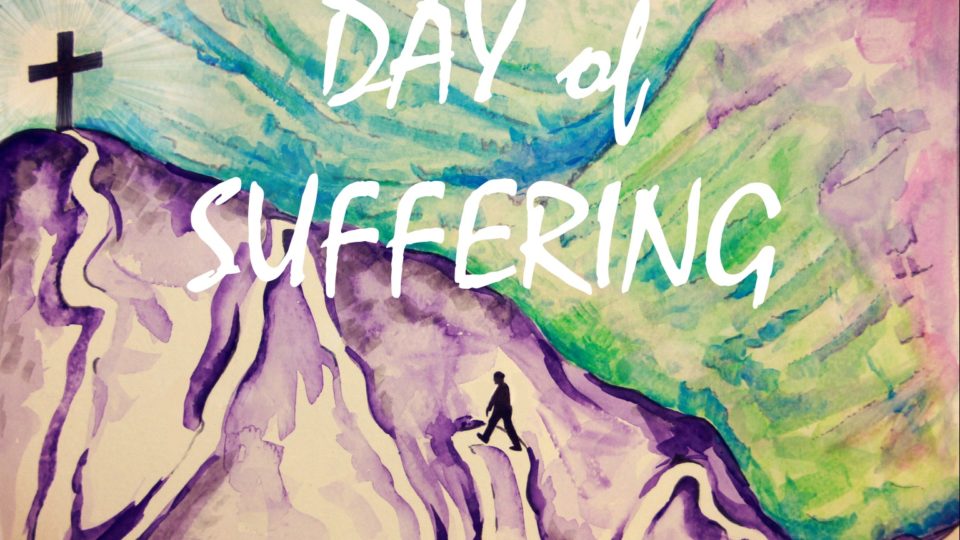 And they compelled a passerby, Simon of Cyrene, who was coming in from the country, the father of Alexander and Rufus, to carry his cross. And they brought him to the place called Golgotha (which means Place of a Skull). And they offered him wine mixed with myrrh, but he did not take it. And they crucified him and divided his garments among them, casting lots for them, to decide what each should take. And it was the third hour when they crucified him. And the inscription of the charge against him read, “The King of the Jews.” And with him they crucified two robbers, one on his right and one on his left. And those who passed by derided him, wagging their heads and saying, “Aha! You who would destroy the temple and rebuild it in three days, save yourself, and come down from the cross!” So also the chief priests with the scribes mocked him to one another, saying, “He saved others; he cannot save himself. Let the Christ, the King of Israel, come down now from the cross that we may see and believe.” Those who were crucified with him also reviled him.

And when the sixth hour had come, there was darkness over the whole land until the ninth hour. And at the ninth hour Jesus cried with a loud voice, “Eloi, Eloi, lema sabachthani?” which means, “My God, my God, why have you forsaken me?” And some of the bystanders hearing it said, “Behold, he is calling Elijah.” And someone ran and filled a sponge with sour wine, put it on a reed and gave it to him to drink, saying, “Wait, let us see whether Elijah will come to take him down.” And Jesus uttered a loud cry and breathed his last. And the curtain of the temple was torn in two, from top to bottom. And when the centurion, who stood facing him, saw that in this way he breathed his last, he said, “Truly this man was the Son of God!”   Mark 15:21-39 (ESV)

What is “good” about Good Friday?

I can only imagine that the dejected and downtrodden disciples would be scandalized to consider this day would eventually be called “Good Friday”. Where were their minds as they sat fearful and confused during the crucifixion of their Master? It was, and remains, the darkest day in history. The greatest punishment of the cross was in God the Father turning his back on his only son. Indeed Christ was tortured physically through the brutality of this barbaric ritual. He suffered emotionally through the humiliation of being hanged alongside miscreants immeasurably worse than he. Despite the humiliation and brutality his greatest pain was delivered spiritually as he was dealt the wrath of God by the very hand of God’s justice. Yet herein lies the bedrock of our Christian religion: Christ died for sinners, fully satisfying the claims of holy justice against us, and as a result turned away the wrath of God from every soul that would trust in him. Jesus’ death on the cross causes us to rejoice for these three glorious reasons.

I cannot know the sense of pure defeat the disciples would have felt as they watched Jesus carrying his cross to the place of the skull, but I do know the panic I have felt when it seems my plans have been thwarted. I feel lost and my human nature begins to call for an immediate “fix”. The death of Jesus was not a wrench in the plan of God, it was the plan of God (Isaiah 53). In eternity past, God the Father arranged a scheme to appoint his very son to be a substitute for his people. Jesus would take the blame and bear the wrath of God. God the Son agreed that when the fullness of time had come, he would submit to this scheme (Galatians 4:4). The Holy Spirit consented to apply this to individuals in their own experience in time. As a result, we see God orchestrate and arrange circumstances to accomplish his will through the wicked and ungodly deeds of sinful men. And he did this in his plan of salvation for us.

My depravity is so great, it cost the death of God’s own Son. I am exposed before the eyes of all others when I stand at the foot of the cross. Christ not only died for me, he died as me. The perfect, sinless Son of God took all the heinous sins of mankind upon his shoulders. Having left the joys and comforts of heaven (John 6:38), he condescended to take the blame and bear the wrath of God. How foolish it is when we think we have something to contribute to our own righteousness or right-standing before God the Father. Each sin was placed upon his son (2 Cor 5:21) and there is nothing we can contribute in return. This enables me to live a free life knowing what was accomplished. This was all accomplished due to a love for me.

Christ Finished the Work of Salvation in the Cross

As Jesus cried aloud and breathed aloud the text points us to the curtain of the temple. I grew up listening to my preachers preach from the KJV at countless evangelism conferences and that glorious text rings in my ears as I consider that “veil was rent in twain.” It is finished! Warren Wiersbe comments that at this moment, “Nothing need be added to it, and certainly nothing dare be taken from it.” We see God revealing that the law (Heb 7:19), the priesthood (Heb. 7:11), nor the sacrificial system could not make a man perfect (Heb 9:9). Scripture reveals, “But when Christ had offered for all time a single sacrifice for sins, he sat down at the right hand of God.” (Heb. 10:12)  And since this work was done, all we must do is repent, believe and accept this for our own salvation.

Indeed, it was a Good Friday.