Descended for Sinners: Prince of Peace

December 8, 2017/Adam Tait/Monday is for Habits 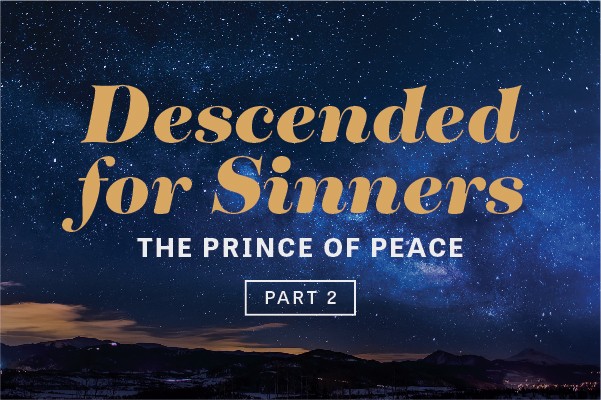 “But there will be no gloom for her who was in anguish. In the former time he brought into contempt the land of Zebulun and the land of Naphtali, but in the latter time he has made glorious the way of the sea, the land beyond the Jordan, Galilee of the nations.

The people who walked in darkness

have seen a great light;

those who dwelt in a land of deep darkness,

on them has light shone.

You have multiplied the nation;

you have increased its joy;

they rejoice before you

as with joy at the harvest,

as they are glad when they divide the spoil.

For the yoke of his burden,

and the staff for his shoulder,

the rod of his oppressor,

you have broken as on the day of Midian.

For every boot of the tramping warrior in battle tumult

and every garment rolled in blood

will be burned as fuel for the fire.

For to us a child is born,

to us a son is given;

and the government shall be upon his shoulder,

and his name shall be called

Of the increase of his government and of peace

there will be no end,

on the throne of David and over his kingdom,

to establish it and to uphold it

with justice and with righteousness

from this time forth and forevermore.

The zeal of the Lord of hosts will do this.”

A Glimpse of Peace

On December 24, 1914, the world had been locked up in the “war to end all wars” for nearly five months. As the sounds of gunfire and explosions decorated the night sky as normal, somewhere in the cold, hard, and hopeless Christmas Eve night came the familiar sounds of Christmas carols. The British would start a song and the Germans on the other side of no man’s land deep in their trenches would echo along. Then the Germans would start a song and the British deep in their trenches would echo along. Some claim to have even heard the sound of brass bands joining in at times. As the sun rose on that Christmas morning, some German soldiers climbed out of their trenches and looked across the battlefield to see their enemy, the British climbing out as well. They each called out “Merry Christmas” in the language of the other as a gesture of welcome and care. The men all began to pile out of their trenches and met in the middle to celebrate Christmas in the midst of World War I. They exchanged gifts like cigarettes, food, and drinks. They sang Christmas songs together. They even played soccer together on the battlefield where they had just hours previously, and would again hours later, be engaged in intense warfare. For a moment, there was peace on earth.[1]

The prophet Isaiah writes to a people who could not imagine peace. Israel was embroiled in war and was facing overwhelming dread. Syria and the North Kingdom (Israel) had banded together to attack the Southern Kingdom (Judah). In a response to their alliance, Assyria had mobilized and had targeted both the Northern and Southern Kingdoms. To say that Assyria is terrifying is belittling them as an enemy of anyone they targeted. It’s in this climate that Isaiah writes to Judah. Chapters 7-12 of Isaiah all focus on the attack, exile, and rule of Assyria in the future of Israel and Judah. It is one of the darkest moments in Israel’s history and Isaiah continues to describe the suffering ahead of them due to their sin. Chapter 8 ends with words like distress, gloom, anguish, and darkness because there was no hope. Then Isaiah writes, “But there will be no gloom for her who was in anguish.” How? How is that possible? How could things change? Isaiah seems so confident. Notice, Isaiah uses the past tense to describe their present situation. He says, “who was in anguish” and “who walked in darkness” as if they weren’t in anguish and walking in darkness presently.  How is that even possible? How could they multiply instead of subtract? How could they increase in joy when there was none? How could they divide spoil when they only had a constant attack and the threat of exile in front of them?

A Child is Born

Just like the faint first notes of those Christmas carols coming from the trenches late on December 24, 1914, Isaiah begins to declare an invasion of hope. “As on the Day of Midian” was a reference to Gideon’s defeat of the Midianite army with his whittled down band of 300 soldiers. It was a victory that could only be attributed to God. For those who were overwhelmed, paralyzed by fear, and unable to act, God promised through Isaiah that a miracle was coming. How would God do this miraculous act? A child. A son. As verse 5 tells us, this child would bring such a profound victory that all vestiges of war could be destroyed because there would be nothing but peace. This child, this son would not be any child, for Isaiah goes on, this heir to the throne would be divine. He would have active knowledge (wisdom) for their lives and situations. He would have divine power to overcome their enemies. He would reign forever in benevolence. Most importantly, He would do what seemed impossible. He would bring and rule with peace. To the overwhelmed and paralyzed Judeans, the Christ was going to bring wisdom and a peaceful reign.

This Prince, this child, this heir, though a surprising twist in this hopeful prophecy, was nothing new. Consider how they should have already known this. In Genesis 3:15, in the curses that followed the original rebellion that ushered in the Fall, God promises a child, an offspring. In Genesis 12:2, 13:16, and 15:5, Abraham is promised a child, in fact, he is promised a multitude of children through an heir. In 1 Chronicles 5:2 and Micah 5:2 we see that Judah has an heir that is ruling over Israel. In 2 Samuel 7:12-16 and Jeremiah 33:14-18 we see that David would have an heir that would eternally sit on the throne. These passages and these promises were not new and pointed to this same child, the Prince who would come to rule and reign. Yet, those promises had been lost in the darkness of this day and in the pain of their present. They were overwhelmed and paralyzed to the point that God’s enduring promise was forgotten. Or worse, they remembered and considered the promise itself to be paralyzed. Was God paralyzed?  Isaiah reiterated God’s enduring promise by looking to the past and to the future. Isaiah knew God and His great promise were not paralyzed. For these people who were hurting, confused, and afraid, Isaiah pointed with surety towards the future God had promised them under the reign of Christ. While they lived in the overwhelming gloom, they could anticipate the invading power of God to change everything. As Assyria approached and exile loomed they could see another day where His presence, embodied in His promised Son, would mean His peace, righteousness, and justice ever expanding to cover the earth like the waters cover the seas. Today could be dark and difficult but the future coming king was sure as if it had already happened and their present pain was in the past because of the goodness and faithfulness of God.

Our Hope for Today

December 24, 1914, was just a glimmer of hope amidst the gloom of war. It was a moment to see what life could be like. Isaiah similarly lifted the eyes of Israel up to see the descending Prince of peace who was coming. 700 years before the birth of Christ, Isaiah reminded and retold the enduring promise of the God-Man that would be born to set His people free. Long before Jesus would descend to bring peace through His laying down His righteous life, God sent Isaiah this word of anticipatory hope to the people of Israel. As they leaned-in, they could almost hear the carols, just like those soldiers in the trenches. They could move out of the trenches of paralysis and bring hope to a place that was hopeless. They could almost hear that angelic choir singing over the shepherds about the birth of the Savior, the Prince of Peace. If you listen this Advent season, you can hear them, too. As we celebrate the birth of Jesus and we just as longingly as Israel await the return of the King, we can hope in our present pain. What makes you feel hopeless? What has you paralyzed in the trenches? Do not lose sight of God’s enduring promise to redeem the corrupt world, to dry up every tear, to resurrect our broken bodies, to give us the long-awaited Jesus. As sure as Jesus came on Christmas day, Jesus will come again to make all things right: “Come Thou long-expected Jesus; Born to set Thy people free; From our fears and sins release us; Let us find our rest in Thee…[2]”

Family Connection: after reading the Scripture with your kids, discuss these questions:

Kids Craft: A Crown for a King

Head over to https://www.firstpalette.com/tool_box/printables/princesscrown.html and download a template for a crown. Print out the template and cut it out for your kids to color and decorate. While your kids are coloring and decorating, talk about what it means to you that Jesus is King. Share with them that one day, the Bible says we will lay our crowns down at His feet because He is worthy. When they are finished decorating their crowns, place them on your Christmas tree as a reminder of our King Jesus who came to bring us peace.