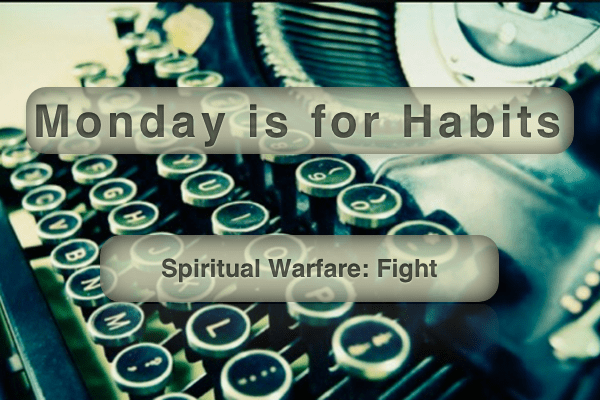 This month has been intense if you’ve been reading along. The World, the Flesh, and the Devil have not just been thought about, but experienced. In a word, life can just feel heavy. Today has personally been a very hard day for me which is why I am taking the time to write this. We have to fight. You cannot sit wounded or just focus on your pain; you must fight. It’s not just that the enemy presses in on us and lies to us in our pain (1 Peter 5), but we only have the few minutes we are given to live.

As C.T. Studd famously wrote, “Only one life soon ‘twill pass. Only what’s done for Christ will last.” Life, though made up of beautiful and intense moments, is fleeting. We don’t know how long we have, but what we do know is that we can never do anything about the past. We cannot relive it, remake it, or change it. With every second that passes, we lose that moment. It’s hard to process the passing of time and the loss of every moment, but it’s a reality.

With that in mind, the enemy wins when we give up our moments. You and I were created to glorify God and every second matters. So, I want to encourage you today in a few specific ways in which you can fight.

In John Piper’s classic “Let the Nations Be Glad,” he says, “Until you know that life is war, you cannot know what prayer is for.” I read that a week or two ago and just stared at the words on the page. I honestly felt humbled. I felt like I knew what prayer was for, but in reading this I realized how little I trust God or ask of Him.

In C.S. Lewis’s “Screwtape Letters” we get a very serious look at the reality of spiritual warfare. It’s an actual war. In war, there is no more powerful weapon than communication. As great as guns, tanks, bombs, and every other form of weaponry are, it’s useless without communication. We have to know when to shoot, where to shoot, when to deploy, what is ahead of us, and much more. If you have the greatest weaponry in the world but no communication, you would just die in a fancy way.

Prayer is not just telling God that we hurt or that we need something, it’s listening and engaging with the Sovereign Lord of the universe who has said that He is for you and will answer your prayers. I think our fight and ability to make the most of every moment is directly connected to our prayer life. You and I need to pray more. We need to take more before the Lord. We need to ask Him more often when there is relational strife if it is warfare and if not to give us wisdom. Praying is how we fight. If we aren’t praying, we aren’t fighting.

I have been reading through William Gurnall’s “Christian in Complete Armor” when I am not overwhelmed with seminary, which is rarely. It’s a long work so taking my time through it has been helpful to keep this reality of living in war on my mind. I read yesterday, “A pilot without his chart, a scholar without his book, and a soldier without his sword, are alike ridiculous. But, above all these, it is absurd for one to think of being a Christian, without knowledge of the word of God and some skill to use this weapon.”

I feel like every month at least once I press this. Reading your Bible is mission critical. In Ephesians 6 where Paul gives us his list of spiritual armor, the sword is really the only offensive weapon that we have. When the enemy hisses in your ear, will you know that it’s a lie? The only way to discern the lies of the enemy is to know truth. The only way to stand firm is to have a foundation.

I look back on so many painful moments in my past and they were often commonly associated by the fact that I was being led by my feelings, emotions, desires, or just the situation and not by any informed thinking or theological conviction. Pain and difficulty come about when we are being led by our desires. That is a foolish and dangerous way to approach life. We need wisdom.  We need truth. We need the Bible. Merely owning a Bible, going to church, and having read it before isn’t enough. You and I need help today. The fight is today. If you aren’t in the Word, you have no weapon.

You can’t win this fight. That’s hard to hear, huh? I am unbelievably driven. I am a perfectionist. I struggle with control more than you can imagine. With that in mind, I really have a hard time with grace. Grace begins with the idea that we can’t. We can’t be good enough. We can’t get things in order. We can’t win the spiritual war we are engaged in. In fact, the desire to try and be good enough is as damning as the desire to do whatever we want. Both hearts are the same heart, a dead heart. Jesus has overcome. Jesus defeated the enemy. He already won.

Have you ever heard of Hiroo Onoda? Hiroo was a Japanese Imperial Army Intelligence Officer that was trained specifically in guerrilla warfare. On December 26, 1944 he was stationed on Lubang Island in the Philippines and was told to defend it from the enemy and to lead his troops until his commanding officer returned to relieve him from his duties. In February 1945, Allied troops arrived on the island and through a few skirmishes he was left with 4 men and they retreated into the jungles. Even though the war ended in 1945, no one told Hiroo. Though the rest of his men abandoned their duties or died, for 29 years Hiroo continued to fight to defend the Island from the Allied troops. The War had long been over, but no one was able to convince Hiroo.

This is a regular for the blog as well because our culture is so dangerously individualistic. I pray for my kids that things dramatically change because the truth is that we desperately need each other. It’s wild to me how often the Lord will graciously put us in these positions where we can’t do something on our own, but for whatever reason we keep trying to.

One of the most gracious things the Lord ever allowed to happen to me was when I was 26 with a ruptured disc in my back. I had to have back surgery and found myself lying on my back for two weeks straight. I loved my wife before my back surgery, but the Lord used that season to show me how crucial it is that I do more than just be a roommate. I need her. I depend on her. I rely on her. What’s crazy is that it’s not just her. I need my church. I need my community group. I need the friends God has placed in my life. I can’t navigate through all the situations I find myself in, but God has graciously given me so many wonderful people to help me in that.

If I didn’t fight my flesh and my tendency to want to do things myself and to just be introverted, I would miss out on these huge blessings, helps, and the grace of not having to figure everything out, do the impossible, or worse. Community takes work but it’s worth it. Community requires a lot from you, but it sure does give a lot in return. Community isn’t about being the savior, but about being a sinner among other sinners who are finding hope in their Savior. I can’t press this enough: you and I need other people and God has given them to us if we will open up our lives to them. Community is a big deal because we have a big fight to face. If you aren’t in community, you will struggle to fight and probably lose more than you have to.

I know these are redundant ideas if you’ve been reading this blog for a while, but that’s the whole point of the blog. The idea that Monday is for habits came out of this idea that Monday is the day you either get things moving or waste the week. You come off the weekend and either position yourself for a week of achievement or you will struggle through letting the week take you wherever it wants to.

Spiritually, we don’t need new weapons to engage in the battle we are in, we just need discipline and grace to use the weapons we have. Being reminded to fight is all about making sure you are doing everything you can to not let the enemy determine your spiritual growth or movement, but about living in such a way that the Lord is glorified in all you do. Be aware of the war we are in. Be aware of your enemies in the world, the flesh, and the devil. Be aware of the weapons the Lord has given you. And fight.