The Chaperone’s Perspective: Continuing On

Seth York, our Cedarmore associate property director, was standing next to me under the pavilion by the lake, pointing out a girl in a bright blue t-shirt who was sitting at a table on the far side. She looked up, noticed him pointing and now waving, and she looked a little bewildered.

“Me?” she motioned with a questioning look, glancing behind her to see if maybe he was waving to someone else. “Yes you!” Seth responded. “What are you saying about me?” she asked back, still on the far side. “Oh, nothing good,” Seth said laughing. He was obviously joking. She laughed too and the banter was apparent. I later learned it stemmed from the year before when she spent the summer at Cedarmore as a staffer and built those relationships with people like Seth and the other property staff and interns. Even not knowing that, however, there would have been no confusion about the joke; just the moment before Seth was telling me about the awesome chaperones that were there for the week of camp. Leah Miller was one of them. 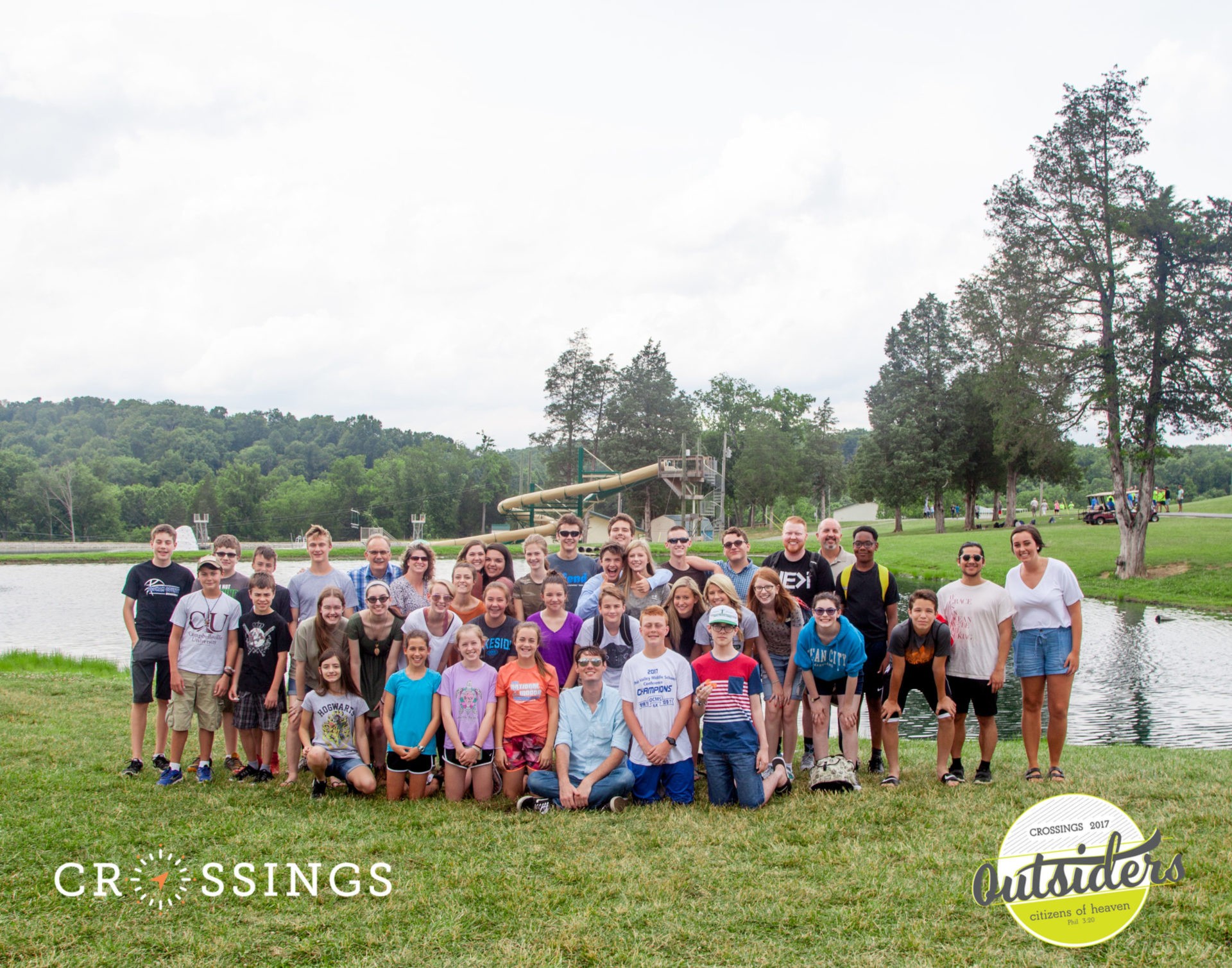 I walked across the pavilion to sit down with Leah and we immediately connected over a shared hometown and mutual friends. It wasn’t long before we were talking about Crossings and how we both got to be connected with such a great ministry. For Leah, she came to camp a few times growing up as a student and then last year decided to join the team as a summer staffer – an experience she loved, so much so that she planned to return as a staffer again this summer.

But our plans are not always the Lord’s and that was the boat Leah found herself in. She said that four months ago, “I felt the Lord say, ‘Leah you need to be home this summer,’ so I had to call Seth and say, ‘This breaks my heart, but I won’t be coming back this summer as staff.’” She didn’t know it at the time, but the Lord still had plans to bring her to Crossings, just in a different way.

Shortly after that decision to stay home, she took an internship position with her home church, Springdale Community Church, working with the youth and young adult groups. It was early on that Leah and her fellow interns suggested that their church revive their Crossings camp days – the ones she grew up with. They worked to make it happen and came to camp this summer with a group of 26 students. 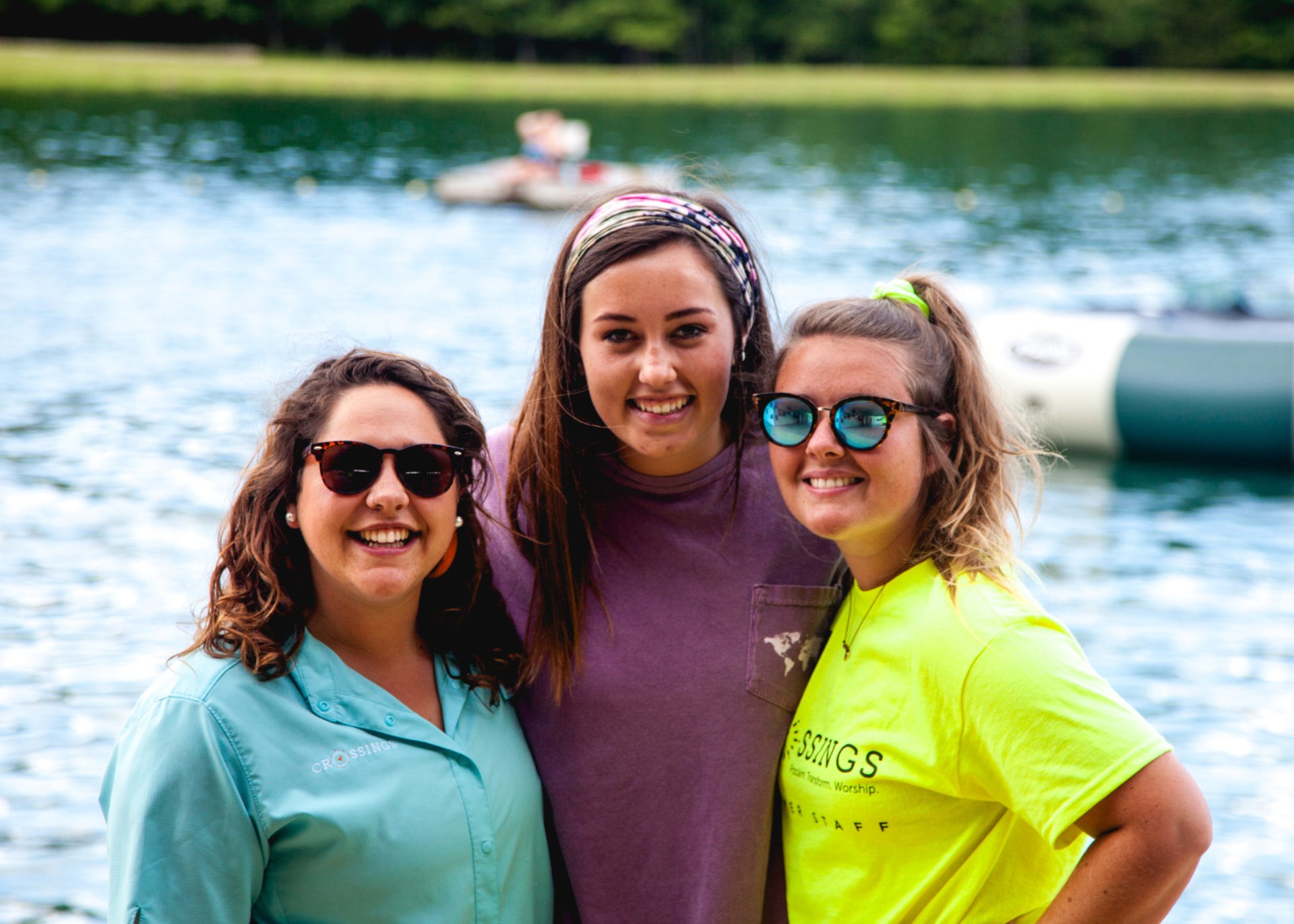 From left to right: Michaela, a Crossings intern, Leah, a camp chaperone, and Renee, a current summer staffer. All three were summer staffers last year and while the Lord has continued them on in various ways, He hasn’t called them away from Crossings.

As we sat there watching the students run around from activity to activity, she laughed as she explained that her experience as a summer staffer made her feel weird about sitting down at camp for any length of time. But then again, she knew that this was exactly how Crossings is designed. “I know I can trust that they are in good hands for these five days,” she said, referring to the staffers and how all camp long they are pouring into each and every kid, being intentional about sharing the gospel, and making sure they have a great time.

But Leah, the other chaperones, and leaders still have the chance to pour into their students throughout camp during the checkpoint times. Crossings makes sure this happens because it’s people like Leah who are the ones that will be there for the students in the days, weeks, and months that follow camp.

“Sometimes you worry that the students are just worshiping the Lord because it’s camp and it’s different than at home,” Leah said, “but I will get the chance to follow up with the students afterwards and say, ‘The God you worshiped at camp is the same God here at home.’”

As Christians, we are called to maintain our relationship with Christ every day. So Leah, and every other chaperone who comes through Crossings, has the opportunity to follow up with the life change that does happen for the students in the five concentrated days of learning about God. Staffers don’t have that chance and neither do the the property directors, worship leaders, kitchen staff, or anyone else involved. It’s why at Crossings we need chaperones. They are the ones who travel home with their students and continue to walk alongside of them throughout the year. They have the incredible opportunity to see growth and sanctification in the students. It’s an important part of the process of the Christian life.

While God called Leah away from staffing this summer, He certainly didn’t call her away from Crossings. She is still ministering and serving the younger generation. She is still making disciples. In our short conversation, it was encouraging to see how she is still living out the Great Commission from the platform as chaperone – it was exciting to know that at Crossings there are hundreds of other chaperones who are doing the exact same.