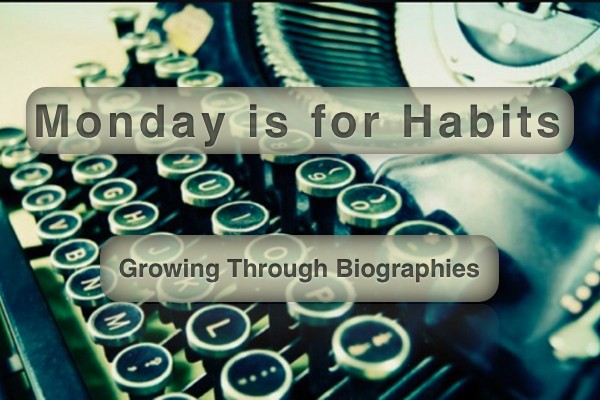 This month we are considering how we grow spiritually. I have been using my story of how God saved me as a senior in high school at camp, and then graciously allowed me to grow, as the basis for these blogs. God used both specific and the regular rhythm of sermons from my local church to grow me, as well as devotionals to teach me discipline and about His love which have helped me in innumerable ways since then. Another way God began to grow me as a young Christian was through the reading of biographies.

I had a good friend in high school named Chad. Chad was a year older than me, and we went to the same school and also the same church. Chad was not a Christian when we met and when he went off to Texas A&M for college, God radically saved him. He got connected to a ministry, and a discipler there both shared the gospel with and poured into him spiritually. Chad would come home for breaks looking for fellowship and decided that the best person to find it with would be the pastor’s son, me. The irony is that I wasn’t a Christian at this point and began to realize that through spending time with Chad. He had something I didn’t have, a desire for God. God used Chad powerfully in my life to not only reveal my need for him but to help me grow as a young Christian. Chad would give me sermons (ones I mentioned in the first blog in this series) as well as books, worship music and so much more. One of the books Chad gave me was “The Invasion of Wales by the Spirit Through Evan Roberts.” It had a trippy cover that caught my attention, and it was small, so I read it. I couldn’t believe what I was reading. If you haven’t read any historical revival accounts, you will equally be as blown away.

Seeing the Power and Glory

The years 1904-1905 were remarkable ones in Wales. The Lord began to move in powerful ways that really can only be attributed to Him, hence the title. Evan Roberts was a coal miner who devoted a large portion of his time to prayer. In 1904, he felt called to ministry, and in October of that year, he began preaching a series of messages that changed the country of Wales. Thousands would gather to hear Evan and others preach. People have said that during that year, there were over 100,000 conversions. It wasn’t just that souls were saved, but the whole community was transformed. Pubs were emptied. Prisons were emptied. Entire rugby teams would get saved and would disband the sport because they were more interested in God than games. I couldn’t believe what I was reading. I had never heard of these movements of God.

God used this book to open my eyes to His power and glory. I had previously seen God as worshiped on Sunday, as a personal help to me with my struggles, but I honestly had not seen this society-shaping God. I had no clue that we should expect and be praying for God to move. This biography opened my eyes.

The Sovereign Hand of God

Then I read a biography on George Muller. Muller was a British pastor who noticed the rising population of orphans and started orphanages. There is much to be said just about his awareness of needs and willingness to do the hard work to join God in His care for the needy. He was no ordinary pastor/social minister. Muller, if anything, was a prayer warrior. Trust me, you don’t know prayer until you’ve read about him. He not only knew God, but he knew the power of prayer.

One time the orphanage was in a difficult spot financially and they had nothing to feed the 300 children. The staff was pressing Muller to do something, so he began to pray. He prayed and thanked God for His provision and then waited. Soon there was a knock at the door of the orphanage. A milkman had his vehicle breakdown and wanted to know if the orphanage could use the milk from his truck because it would spoil while he waited to get the vehicle fixed. It was exactly enough milk for the 300 children. The stories that you will read from Muller’s life will absolutely blow you away by the power of prayer, and at the love God has for us.

The beauty of a biography is that you not only learn about the life of a person, but you see God at work in every area of their life and can step back and see His hand in your life. We can be tempted to see portions of our life as insignificant or to focus on the pain of a season instead of the power of our God. Biographies won’t let you do that. They keep pointing to God’s sovereignty in everything. It can be unbelievably helpful as a young or old Christian to see God’s faithfulness. It’s powerfully helpful to learn that we can trust God, call on God, and wait for God. Biographies have this encouraging way of giving us a longer range of view of our lives and situations while anchoring us into God’s goodness and supremacy.

So, what biographies should we read? I would say ask someone that you consider to be a strong Christian if they would recommend an encouraging biography. Ask your pastor if God has used a specific biography to encourage them. Pick someone you are intrigued by that has done something significant for the kingdom.  Here are some quick suggestions:

I cannot begin to tell you what it does in my heart when I read about revival. It’s the spiritual equivalent of watching Braveheart. What’s sad is that most Christians have never read or learned about these powerful movements of God. I mentioned the Welsh Revival of 1904-1905, but there are the Great Awakenings in early America with Edwards, Whitfield, Wesley, and many more. There are the Moravians and Count Zinzendorf who had a prayer meeting that lasted 100 years and to amazing missions efforts.  The Reformation is considered by many to be a revival. The movements that came from the ministry of Dwight L. Moody are unbelievably encouraging to read about. You will read about ordinary people who prayed and God moved in extraordinary ways. You won’t regret a moment you spend studying about God’s power throughout history.

Any of the Reformers

It’s is the 500th anniversary of the Reformation, so this is highly appropriate. The Reformation was really an awakening of the church to the authority of the Scriptures. Many will hang the Reformation on the doctrine of justification, which was the war cry of Martin Luther, that salvation is by faith alone, through grace alone, in Christ alone, by the revelation of the Scriptures alone, to the glory of God alone. That’s a lot, but in essence it was a revolt from the Catholic Church and its abuses that came about from elevating tradition to the same level as Scripture.

The Reformers found the Scriptures to be God’s Words and worth risking their lives for. You will find significant spiritual heroes from this time-period: Martin Luther, John Calvin, Jan Hus, Huldyrch Zwingli, John Knox, and more are men we should esteem and learn from. The lives they lived and the doctrines they gave their lives for will help you understand how blessed you are and encourage you that taking a stand for the Bible is always worth it.

Amy Carmichael, Brother Andrew, John Patton, George Muller, Hudson Taylor, Nate Saint and Jim Elliott are names that have encouraged generations of Christians. These are men and women who have given their lives to see the good news of Jesus go to the ends of the earth. You and I have a calling, and it’s not to just survive this life, but to live for Jesus and to make Him known. Missionary biographies have a way of working themselves down into your heart and pulling you from just the comfortable to what God’s created you for. Nik Ripken’s “Insanity of God” is a great modern missionary book that I would encourage you to read and allow God to stir your heart for the nations.

Christians who have faithfully struggled

This is just one last suggestion. You can read about some unbelievably faithful saints who have struggled and found Jesus to be better than anything else. I am thinking specifically about Charles Spurgeon who struggled with depression and how much I have been encouraged in my own struggles with depression. God has used his life and his fight for joy to often help me when I was wounded and depressed. John Piper has a series of books called “The Swan Are Not Silent” that looks at the lives of three men and how God was with them through their hardest moments. We cannot avoid pain and difficulty, but we can learn to see Jesus as worthy and God as faithful despite the storms.

God used a few biographies early on in my walk with Him to open my eyes to His power, His presence, and His perfection. I learned who He was and how He worked through the lives of some men and women who lived and trusted Him. It helped me to know that struggling is normal, that life can be hard, but that God is there and active despite what I think or feel. They will press you to trust and obey. They press you to do hard things. They will press you to walk when you don’t think you can. Biographies are great tools because they let you see life from an overview and not from the overwhelming feeling of this current moment. If you want to grow spiritually, read a good biography.