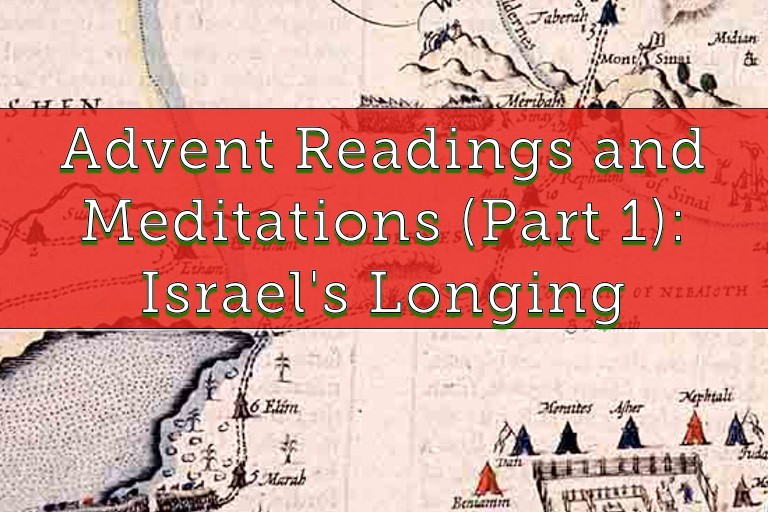 By: Trey Brunson, Director of Development

We can all remember the gift. That one gift that stood out when we were a kid (or maybe as an adult) that you dreamed, hoped, and longed would be under the Christmas tree. Like Ralphie in A Christmas Story, our hearts get fixed on an idea and it seems to create a mixture of hope, anticipation, and excitement. Maybe it was a bicycle, a doll, or a Red Ryder, carbine action, two-hundred0shot range model air rifle. We’ve all known the feeling of longing.

It may surprise you, but that heart of longing is the goal of every author in the Old Testament. The 39 books of the Old Testament are a bit like a Disney ride. There are moments of slow building tension (Numbers) and moments of absolute exhilarating action (Daniel) that are all designed to produce a longing and anticipation in the hearts of the original hearers and the current readers. God had a gift for humanity, and the idea of that gift produced longing. The Word “advent” comes from the Latin adventus which means “coming.” The season between Thanksgiving and Christmas, the four weeks of longing, has been historically known as Advent because it represents the longing of God’s people over the roughly 4,000 years of Old Testament history. They were awaiting the coming of the Messiah, the gift of God.

Maybe no period in the Old Testament better represents this idea of longing more than the nation of Israel in bondage in Egypt. God had told Abraham that all of this would happen in Genesis 15:13-14:

“13 Then the Lord said to Abram, “Know for certain that your offspring will be sojourners in a land that is not theirs and will be servants there, and they will be afflicted for four hundred years. 14 But I will bring judgment on the nation that they serve, and afterward they shall come out with great possessions” (Genesis 15:13-14 ESV).

Israel found themselves in captivity with just the longing for and promise of a place (the Promised Land) and His presence. They toiled for 400 years. Difficult labor, oppressive leaders, fear and frustration defined every day. They longed for—not just the end of their slavery—but also for the life God had promised them and His nearness to them. As we see in the book of Exodus, their longing was purposed because God was leading them out of slavery and into the joy of His presence. He was leading them from physical liberation to Christ who could spiritually liberate them. Their longing was God-given because it led them to Jesus who was also God-given.

As we step into this season of celebrations, gifts, shopping, decorating, fellowshipping, and longing, would you take a minute today to pause and think about what your heart is longing for? Maybe more than a gift under a tree your real longing is for communion, a moment of connection with the God who loves you. Maybe what you need is the gift of His presence and grace in your chaos.

Jesus is the gift. Jesus has given us not only life spiritually, but also peace practically today. Maybe you just need to take a moment to breathe, reflect, and realize what you already have in Jesus. It is from this place of joy and rest that we can give, serve, and care for all the others that God has and will bring into our lives this holiday season. So, long. Long for more. Yearn for more. Because you have more, you’ve been given more. Jesus is enough and more for you and your longings.

“13 Then the Lord said to Abram, “Know for certain that your offspring will be sojourners in a land that is not theirs and will be servants there, and they will be afflicted for four hundred years. 14 But I will bring judgment on the nation that they serve, and afterward they shall come out with great possessions.”

“7 Then the Lord said, “I have surely seen the affliction of my people who are in Egypt and have heard their cry because of their taskmasters. I know their sufferings, 8 and I have come down to deliver them out of the hand of the Egyptians and to bring them up out of that land to a good and broad land, a land flowing with milk and honey, to the place of the Canaanites, the Hittites, the Amorites, the Perizzites, the Hivites, and the Jebusites. 9 And now, behold, the cry of the people of Israel has come to me, and I have also seen the oppression with which the Egyptians oppress them.”

“4 And when in time to come your son asks you, ‘What does this mean?’ you shall say to him, ‘By a strong hand the Lord brought us out of Egypt, from the house of slavery.”

“10 Also it was I who brought you up out of the land of Egypt and led you forty years in the wilderness, to possess the land of the Amorite.”

“17 And the scroll of the prophet Isaiah was given to him. He unrolled the scroll and found the place where it was written, 18 “The Spirit of the Lord is upon me, because he has anointed me to proclaim good news to the poor. He has sent me to proclaim liberty to the captives and recovering of sight to the blind, to set at liberty those who are oppressed, 19 to proclaim the year of the Lord’s favor.”20 And he rolled up the scroll and gave it back to the attendant and sat down. And the eyes of all in the synagogue were fixed on him. 21 And he began to say to them, “Today this Scripture has been fulfilled in your hearing.”

“8 By faith Abraham obeyed when he was called to go out to a place that he was to receive as an inheritance. And he went out, not knowing where he was going. 9 By faith he went to live in the land of promise, as in a foreign land, living in tents with Isaac and Jacob, heirs with him of the same promise. 10 For he was looking forward to the city that has foundations, whose designer and builder is God. 11 By faith Sarah herself received power to conceive, even when she was past the age, since she considered him faithful who had promised. 12 Therefore from one man, and him as good as dead, were born descendants as many as the stars of heaven and as many as the innumerable grains of sand by the seashore.”