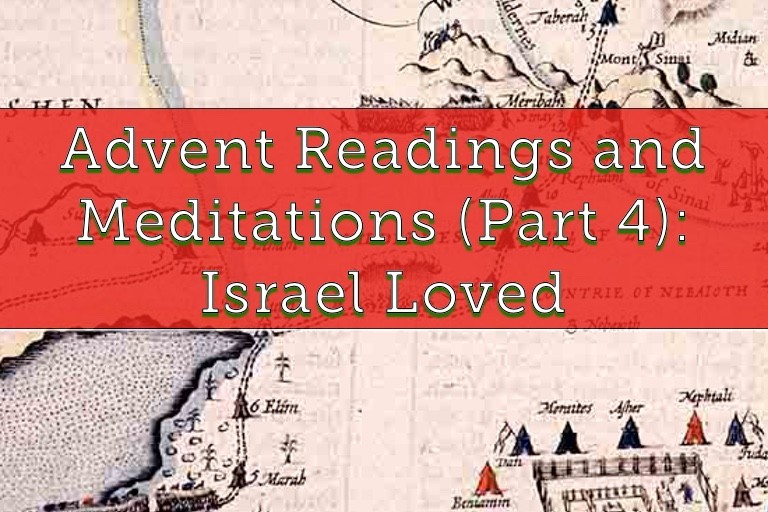 Longing, lostness, and loss were all emotions and states that Israel existed in, while in the Exodus process. It’s easy just to read through those portions of the Bible as cold facts about a people group in the ancient Middle-East. Dates, names, locations, skirmishes, and conquests can seem to us to be very distant and very irrelevant but they were real people, real situations, and they are given to us as an explanation of what God would do in Jesus and as an interpreter of our lives in some capacity. As we have reflected on this period in Israel’s history and considered how they waited and needed the Messiah just as we need Him today, we may have easily forgotten one more thing, love.

Nothing happened to Israel that wasn’t from love and for love. Listen to the way God saw all of this from His prophecy through the prophet Hosea:

“1 When Israel was a youth I loved him, and out of Egypt I called My son. 2 The more they called them, the more they went from them; They kept sacrificing to the Baals and burning incense to idols. 3 Yet it is I who taught Ephraim to walk, I took them in My arms; But they did not know that I healed them. 4 I led them with cords of a man, with bonds of love, and I became to them as one who lifts the yoke from their jaws; And I bent down and fed them.”

Did you hear that? That is parental, sacrificial love. It wasn’t just that God called them out of Egypt, but it was this consistent walk with Israel where He cared for them, instructed them, raised them, and nurtured them. At times, like a loving parent, that took the form of discipline and maybe that felt like they were lost but as we’ve seen God was with them every step as they wandered. In fact, they were wandering following His pillar of cloud and fire and every morning ate His manna and drank the water that He produced for them from bitter water or rocks. At times, it was training and instructing them as they battled, settled, and worshiped. At times, it was the joy of His presence and nearness as He filled the tabernacle, temple, and hearts of individuals. God was a parent in the highest and purest sense. They wandered, worshiped, worried, and waited, but God consistently loved them.

As we’ve thought about for the last three weeks, Christmas can produce a range of emotions. Advent is rhythm built into the calendar to help us focus our hearts and minds at this time of year.   Israel anticipated the coming Messiah. Israel longed for His arrival. Israel felt lost while they waited. Israel experienced significant loss during their wandering. And yet, the narrative of the Exodus generation and every generation up to the first cry of that baby born in the stable was one of the active presence of God. He led them out of bondage. He met them at Sinai. He guided them to the Promised Land. He defeated their enemies before them. He established them as a nation. He filled the tabernacle and temple with His presence. He sent them prophets, priests, and kings to communicate His plan, His heart, and His commands. He sent them into exile and brought them back to purge them of their wickedness. The faithful love of God defined Israel.

Christmas may be a lot of things to you. It may be pure joy. I’ve got two little boys that are more excited right now than a squirrel on a trampoline. It could be lonely and heavy as you’re either away from people you care about or are walking through life without someone you care about. For almost all of us, it’s a stressful time because of the busyness wrapping up the end of the year, attending all the events, attempting to get your shopping done, or you’re just trying to get a parking space anywhere. Here’s the thing, though, Christmas isn’t about any of those things. If you didn’t get your shopping done, the sun will still come up tomorrow. If you don’t make all those events, you will survive. Christmas like every day of your life is about the love of God. Believer that baby was the second member of the Trinity that stepped out of the presence of the Father and into the flesh of an infant in a filthy barn where He would be laid to rest in a feeding troth.   All of this was undertaken because of love for you. Non-believer the Scriptures are clear that this was all done for you out of love. The Scriptures lay out this magnificent love as an invitation into the most important and intense relationship the universe has ever known.

So, when you open every gift this year, think about the gift wrapped in swaddling clothes and laid in a manger. When you sit down to eat whatever family traditional meal you eat, think about the Israelites who were fed by their loving Heavenly Father in the wilderness and the Promised Land. When you watch the nostalgic Christmas movies that your crew watches on Christmas Eve or Christmas Day, think about the best Christmas story ever told of the coming Messiah. As you feel loved by those you celebrate with, remember that God has lavished you with His love because He is love.

“36 Out of heaven he let you hear his voice, that he might discipline you. And on earth he let you see his great fire, and you heard his words out of the midst of the fire. 37 And because he loved your fathers and chose their offspring after them and brought you out of Egypt with his own presence, by his great power, 38 driving out before you nations greater and mightier than you, to bring you in, to give you their land for an inheritance, as it is this day, 39 know therefore today, and lay it to your heart, that the LORD is God in heaven above and on the earth beneath; there is no other.”

“6 Both we and our fathers have sinned; we have committed iniquity; we have done wickedness. 7 Our fathers, when they were in Egypt, did not consider your wondrous works; they did not remember the abundance of your steadfast love, but rebelled by the sea, at the Red Sea. 8 Yet he saved them for his name’s sake, that he might make known his mighty power. 9 He rebuked the Red Sea, and it became dry, and he led them through the deep as through a desert. 10 So he saved them from the hand of the foe and redeemed them from the power of the enemy. 11 And the waters covered their adversaries; not one of them was left. 12 Then they believed his words; they sang his praise.”

“2 Thus says the LORD: “The people who survived the sword found grace in the wilderness; when Israel sought for rest, 3 the LORD appeared to him from far away. I have loved you with an everlasting love; therefore I have continued my faithfulness to you. 4 Again I will build you, and you shall be built, O virgin Israel! Again you shall adorn yourself with tambourines and shall go forth in the dance of the merrymakers. 5 Again you shall plant vineyards on the mountains of Samaria; the planters shall plant and shall enjoy the fruit. 6 For there shall be a day when watchmen will call in the hill country of Ephraim: ‘Arise, and let us go up to Zion, to the LORD our God.’”

“16 On that day it shall be said to Jerusalem: “Fear not, O Zion; let not your hands grow weak. 17 The LORD your God is in your midst, a mighty one who will save; he will rejoice over you with gladness; he will quiet you by his love; he will exult over you with loud singing. 18 I will gather those of you who mourn for the festival, so that you will no longer suffer reproach. 19 Behold, at that time I will deal with all your oppressors and I will save the lame and gather the outcast, and I will change their shame into praise and renown in all the earth.”

““16 For God so loved the world, that he gave his only Son, that whoever believes in him should not perish but have eternal life. 17 For God did not send his Son into the world to condemn the world, but in order that the world might be saved through him. 18 Whoever believes in him is not condemned, but whoever does not believe is condemned already, because he has not believed in the name of the only Son of God.”

“7 Beloved, let us love one another, for love is from God, and whoever loves has been born of God and knows God. 8 Anyone who does not love does not know God, because God is love. 9 In this the love of God was made manifest among us, that God sent his only Son into the world, so that we might live through him. 10 In this is love, not that we have loved God but that he loved us and sent his Son to be the propitiation for our sins.”