Let Me Tell You About My Tattoo 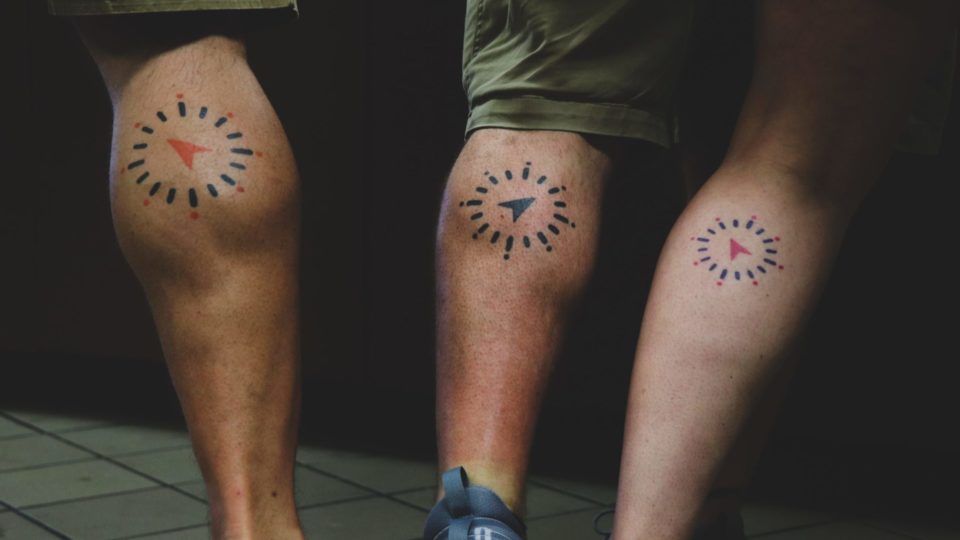 It was Day 2 of camp when a staffer approached me and said, “Hey, have you seen those group leaders with the Crossings tattoos?” Not only had I not seen them, but I was a bit confused as to why someone would have a Crossings tattoo. The staffer went on to tell me that there were four group leaders who had the Crossings compass logo tattooed on them after last summer. I walked away from that conversation and didn’t think much more of it.

At this point, I’d had about four staffers come and tell me about these people who have Crossings tattoos. As chance would have it, I was hanging out at the waterfront when I turned to the man next to me and noticed a compass tattoo on his calf. I figured that if four people had told me about this, and I now found myself standing next to the person, then God must be trying to tell me something. So I started speaking to him and he introduced himself as Jason from Bethel Christian Church. I asked him about his tattoo and he chuckled slightly as if he’d been asked the question more than once. He began to tell me a little bit of his story, about how God changed his family at camp and how the tattoo was a reminder of that life change. Immediately I knew that I wanted to hear more. I made a plan to meet with all four of the group leaders later that day.

I sat down with the four group leaders: Ashley, Lexi, Jason, and Sharon. I asked them each to answer one question: What are your stories behind your tattoos? Their faces lit up at the question. Ashley was the first to answer. He had been to camp at Cedarmore as a teenager and had now come back with the youth he’s been working with for the last ten plus years.

“Cedarmore gave me my life lessons. I was raised in the church, but being here taught me how to live my life that much better. To live it more for God.” He went on to say, “The atmosphere here…I got this [tattoo] as a reminder of here. And it’s a constant reminder of what this campus, what this land, has done for me.”

He mentioned that to him the tattoo was also a salute to the staffers. That the way the staff interacts with the students is an encouragement and testimony to them.

“You know we’re out here 51 weeks of the year with them, and that one week is so important to them. And you all’s enthusiasm is everything.”

Then Lexi began to give her reason.

“I think I got it because last year was my first year and ever since coming here it was just like a different atmosphere…And ever since last year, my life has taken a turn to where God is in control and I listen to him more now.”

She talked about what a good reminder it is, not only to remind herself but her students as well, to stay true to themselves and to their identity in Christ.

Jason, who I had talked to some earlier, shared with me the specific impact Crossings had made on his family.

“My daughter got saved soon after we got back last year and I love it here and just watching the way you all interact with people. But for me, it’s been more connections with our youth. Our students; we really come here to spend more one on one time to get to know them, for them to get to know us.”

The tattoo reminds him not only of the good times he’s had at Crossings, but the ways that God has blessed him and his family through camp. His wife Sharon had a similar story.

“Right after we came home our daughter said her prayer of salvation and wanted to be baptized…This is where [God] really changed her.”

She went on to talk about how Crossings gives the freedom to be yourself in a place that is isolated from the outside world. Everyday stresses can be put on hold while you are at camp.

Those everyday stresses often cause students to put on a false persona in front of other. Jason and Lexi commented on the opportunities that camp gives them to get past that.

“It’s definitely a better environment to get in touch and in tune with what’s going on in the youths’ lives. During the week it’s easy for all of us to put on a different face,” said Jason.

“It’s like disconnecting to get connected with God,” finished Lexi to sum it up.

They each reminisced about how they walked out after last year’s camp with the idea of getting tattoos together. At first, it was just an idea that was tossed out for consideration, but they all immediately got on board with the plan.

“When we got home, like a week or two after, we went and got our tattoos at the same time,” said Ashley about Lexi and him, “The tattoo artist was like, ‘What’s that?’ He was asking about the compass and it was allowing us to talk and witness to him…So many people stop and say, ‘Is it real? What’s that mean?’ and that’s what I get asked a lot, and I say, ‘Always go to God. Point to God.’”

Ashley mentioned earlier that his tattoo was partly an ode to the staff, and he spoke about how he still remembers the staff from when he was here as a teenager. There is an environment that is created where students feel free of judgment from others. That is a huge part of what Sharon loves about Crossings.

““And you know it’s just like we said; there’s just no judgment, but also when they see you all you’re just so happy, and just so excited,” said Sharon, “And they’re just like, ‘I’m here and they’re so excited to see ME.’”

Lexi said that every year when they leave, they immediately start counting down for next year.

Back home at their church, about two to three weeks after camp the youth give their camp testimony to the congregation and everyone loves it. Bethel also does a dessert auction where they said 5,900 dollars was raised for their students to go to camp. They said people in their church would pay two or three hundred dollars for chocolate chip cookies or fudge.

As we continued talking, Ashley mentioned that all of his tattoos represent something meaningful to him. His favorite hymn is “Trust and Obey”. He has it tattooed on his arm. He said that having that on his arm has saved him so many times from doing the wrong thing because it is a constant reminder.

“You can burn and lose a picture, you can’t lose a tattoo,” Jason added.

“And I said that’s what you’re here for, keep rolling. Every girl ended up giving their testimony.”

When I initially asked them about the stories behind their tattoos, they said the stories were “different, but the same”. I was constantly reminded as they spoke that the same goes for those we live life with every day. While we are all different people, we’ve all been redeemed by the same savior, and that is a beautiful reminder. So if you ever see Ashley, Lexi, Jason, or Sharon on the street, ask them about their tattoo, I’m sure they would love to tell you about it. 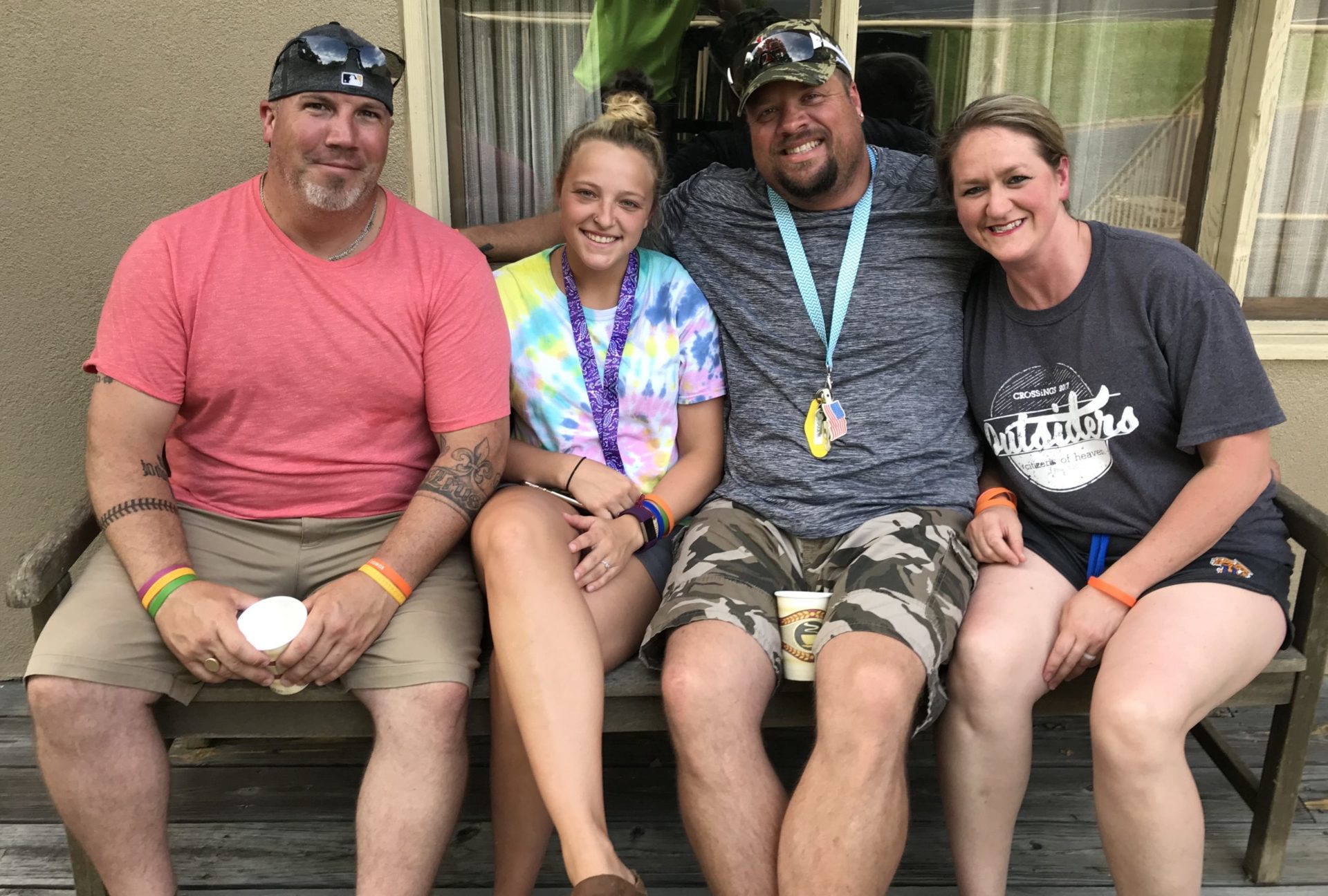