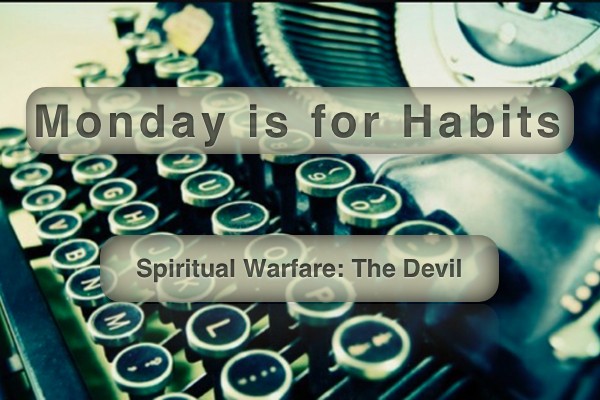 We are in the midst of camp here at Crossings. Last month, we considered how we can grow spiritually. With hundreds of students returning home from camp as new members in our faith family, we wanted to think about how we could help students continue to grow spiritually. We also want to make sure that “camp high” is merely describing a semi-sugar induced coma from the snack shack. For too many, “camp high” describes a spiritually confusing moment from one’s past.

This month, we want to consider and help our new brothers and sisters to fight the good fight. As soon as they return home, the enemy will use anything possible to attack the seeds of faith that have been sown. Matthew 13 tells us that where the seed has been sown, the enemy seeks to snatch it away. Matthew 13 also teaches us that difficulties in life can remove the seed and that the cares of the world can choke out our faith like a weed chokes out a new seedling. In Ephesians 2, Paul identifies a similar tri-fold enemy: the world, the flesh, and the devil. For the next four weeks, we will consider each enemy, how to defeat them, and how to fight the good fight of growing in love for Jesus.

This week, I want to dive right in and consider the devil. According to Tim Keller, there are two dangerous pitfalls in our thinking about Satan: superstition and substition. Superstitions are commonly held beliefs that are not true. When we are superstitious, we can give Satan too much credit. I’ve met many folks who imagine a demon is to blame for every bad thing that happens to them: losing keys, running into traffic, having a particularly stressful day, etc. The flipside of superstition is substition. Subtition speaks to the idea of not giving enough credit to a generally known fact. Did you wake up this morning and think, “I have an enemy who wants to destroy me”? Probably not. Have you ever wondered if the relational difficulties you are having are demonic? Probably not. Scripture tells us that spiritual warfare is a normal reality and activity for believers. Yet, too many of us live like there is no such battle. How do we think rightly and biblically about the devil? If he is truly our “adversary” who is “prowling about seeking someone to devour” (1 Peter 5:8), what can we do and what should we do?

1 Peter is a book that speaks to people who have experienced real pain. These believers were under persecution as Christians, but Peter also warned them that all believers will experience pain and difficulty. It is ironically an encouraging letter because Peter’s point is that the grace we have received and have in Christ is more powerful than any pain we will experience in this life. Towards the end of that letter, Peter takes a few verses to warn about the reality of Satan. 1 Peter 5:8-9 tells us:

“Be sober-minded; be watchful. Your adversary the devil prowls around like a roaring lion, seeking someone to devour. Resist him, firm in your faith, knowing that the same kinds of suffering are being experienced by your brotherhood throughout the world.”

First, we need to be sober-minded about our enemy. Peter’s point here is that we need to think rightly about our enemy and our hearts. The easiest way to understand “sober-minded” is to consider the contrasting attitudes and behaviors: drunkenness, out of control, unclear thinking, etc. One does not want to go into battle drunk or without a clear head. Ignoring the reality of the enemy or choosing ignorance about the enemy is potentially damning. Even in times of difficulty and pain, we have to constantly make ourselves aware that Satan hates us. When Peter says, “Be sober-minded,” he is saying, “Don’t ignore the terrifying reality of Satan.” Satan exists and is pursuing you and me. Demonic activity is real. Spiritual warfare is normal.

We also need to be alert. Peter refers to him as “our” adversary. Peter personalizes this because it’s our personal problem. Then Peter uses a fearful analogy: the devil is like a roaring lion. Even worse, he is on the prowl seeking someone to devour. There are a few things to process here. First, the ancient world widely recognized lions as predatory animals. They had seen them at zoos or in gladiatorial games. Peter is placing a destructive and dangerous image into the minds of his readers.

Notice that the lion is roaring. The roar is meant to elicit fear. Satan is seeking our destruction and he does by “roaring” at us—he lies, exaggerates, twists, and manipulates us in order to make us fearful. Peter’s audience are in pain and are thus susceptible to the lies of the enemy. Notice that the pronoun switches from a personal “our enemy” to an impersonal “someone.” Satan’s nature is to hunt and destroy. We are all targets. Watchfulness is not enough. To defeat this enemy, we must be alert. He is coming after you and me. He is looking for our weaknesses so that he can exploit them and destroy our faith. You need to know that his tactic is to lie (cf. Genesis 3!) and to produce fear. You must be watchful.

Lastly, you need to resist the devil. The word Peter uses is actually a military term. It is the position of opposition. Peter had used a similar term earlier in verse 5, where he said that God opposes the proud. God makes war against the proud and in turn we are to make war against the enemy. If most of us are ignoring the reality of the enemy and are completely unaware of his tactics and manipulations, then that guarantees that there are very few of us are resisting the devil. How in the world do we resist Satan, though? Peter gives us two quick ideas.

First, we need to stand firm in our faith. We need to be growing spiritually in such a way that it is grounding us in this fight. How are you strengthening your faith? This is an active idea and not a passive assumption. If you aren’t careful, you can be lulled into the idea that sanctification is passive, thinking that God is going to sanctify you no matter what you do. In reality, though, sanctification is a synergistic work. Synergistic means cooperating. Whereas salvation is a monergistic work, meaning a work done to us, in sanctification we join in the work of our growing in Christ-likeness. Paul uses the ideas of “putting off” and “putting on” in Ephesians and Colossians. Peter has been pressing these believers to “humble themselves.” Our spiritual growth is an active focus and process that we have to join God in doing. The good news is that there is grace even in this pursuit. You need a regular intake of scripture. That is personal devotional time as well as listening to sermons or other teachings on the Word. You need corporate worship and community. You need growth in your prayer life. You need to serve other people. All of the spiritual disciplines are crucial to you in your engaging with the enemy. As you return from camp or just continue in your walk with God, you need to keep growing. Don’t live off the fumes from a past experience with God—dwell with Him today. Grow spiritually, because just like training for a sport, it prepares you for the battle ahead of you.

Secondly, Peter says that we are better together. He tells his audience that they aren’t alone in their suffering. One of the primary lies of the enemy is that you are alone.  Satan loves to isolate believers. We are not alone. You will never experience something and be the only one. Anything in your past, no matter how painful, does not make you unique. We have the gracious gift of community to press this idea into us. We all experience pain, suffering, sin, and life. We don’t have to endure or navigate them alone, though. You will find so much encouragement, perspective, and hope in community. You will find that your painful past will get repurposed into powerful ministry if you will engage in community. The point is that, while Satan will lie to you and seek to isolate you in order to destroy you, you have a real weapon in community. Use it.

So, as you head home from camp or just go about life wherever you are, please be aware that as Christians, we are on the front lines of a spiritual battle. Be sober-minded. Know what is going on around you and take control of your responses to it. Be watchful. Make yourself aware that you are under attack, how you are being attacked, and how you are hurting and creating opportunities for attack. Lastly, resist the devil. Grow spiritually and grow together with other believers. This plan and focus will help you not only avoid pain and attack but will help you keep fighting the good fight. St. Augustine once said:

“Christ is called a lion because of His courage; the devil, because of his ferocity. The one lion comes to conquer, the other to hurt.”

You have an enemy. He seeks your destruction. He is ferocious and hostile. Yet, you have a Savior who has already defeated Him. Don’t let the defanged lion steal your seed. Be sober-minded, watchful, and resist Him.